Christine Mae Prior died peacefully in her home on Friday, May 29th in Naperville, Illinois at the age of 62.

Chris was born on October 18th, 1957 in Chicago, Illinois to Alvin and Thelma Kendzora, but grew up in a warm, friendly community in Berwyn, Illinois.
In 1980 she began working for the law firm of Sonnenshein, Nath, and Rosenthal in the Sears Tower, where she worked for over 6 years. In 1993, Christine moved to Naperville and began working as a bookkeeper at Inland Real Estate and Investment Corporation. She would work at Inland for over 25 years, gaining many close friends and fans of her fashionable clothes and shining personality.

Chris was a fantastic singer, from shining moments in high school talent shows to the illustrious William Ferris Chorale. No matter which church she attended, she served as an active and dedicated member of her church choir. For the last 7 years she found her musical home at Church of the Holy Nativity, where she found the space for fellowship and song.

Above all else, Chris filled the world with joy, with a knack for turning the smallest interaction into a heartfelt moment. She treated others with kindness and lived by her personal motto: “Love One Another.”

Christine is survived by her father Alvin, her siblings Kathleen (Gary) O’Rourke and Steven (Christine) Kendzora, and her children, William, Daniel, and Elizabeth.

Following Chris’s wishes, her body will be cremated and her remains given to her three children. A memorial service will take place at a later date once gatherings are safe. The family is grateful for the condolences, but declines flowers and donations. 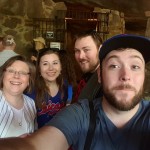